skip to main | skip to sidebar

Continuing at Huff Po is another small minded review of Inglourious Basterds http://tinyurl.com/nyeqfc (please bear with me until I learn...

Continuing at Huff Po is another small minded review of Inglourious Basterds http://tinyurl.com/nyeqfc (please bear with me until I learn how to do links here.) This one is called: The Problem With Tarantino: He Has Nothing to Say where he goes on to talk about Tarantino's lack of morality. Does he mean preachy morality? So many criticisms of Brad Pitt's portrayal of Aldo Raine that my disgust increases.

Here's the deconstruction of Pitt's Aldo Raine. It is a moving, funny, tender memorial to Aldo Ray, a Hollywood actor who always turned in an excellent performance, and who rarely played the leading man. Aldo Ray was 18 in 1944 when he joined the Navy and was a Frogman and served in the battle of Okinawa. He was in many movies from the late 40's, through the 50's and 60's and did radio but mostly disappeared in old age. When he died his small town Crockett, CA. honored him but that was all the tribute he got. A major film of his was Miss Sadie Thompson with none other than Rita Hayworth. It was based on a story by Somerset Maugham titled Rain. He was known for his war roles and tough guy roles and gravelly voice. In later years he played redneck parts. and so we see how carefully and subtly Tarantino and Brad Pitt, without fanfare, constructed this tribute to Ray. The rope burn on Aldo Raine's neck probably is a sign for something, but I am not sure. The scalps probably refer to Pitt's role in Legends of the Fall.

What a lovely thing to do. People who have nothing to say don't do this. And without announcing it to accept applause, but quietly letting you learn how to decode a film on your own. And to make fun of film buffs in the know as the raison d'etre of a film is puerile pjorative rubbish.

http://en.wikipedia.org/wiki/Aldo_Ray
Posted by seymourblogger at 5:55 PM No comments: Links to this post

MY IMPEACHMENT READING THROUGH BARTHES EMPIRE OF SIGNS 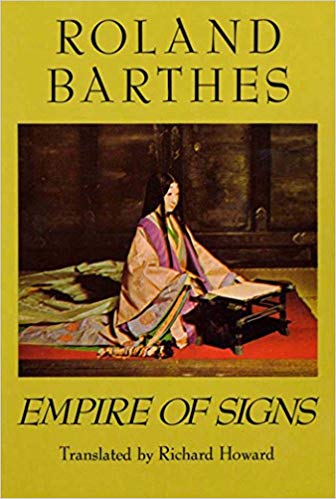 Reading impeachment along with Barthes's #EmpireofSigns. Impeachment is an EMPTY sign, an EMPTY SIGNIFIER. Or as the Buddha says,
"The Form is Empty."

Is this even real by any means of observation? Then Trump gives speeches saying "I dont feel impeached." And he doesn't. BECAUSE IMPEACHMENT is a signifier of a FORM that has been bled of any meaning. Impeachment is a meaningless FORM. IT IS EMPTY!

It used to mean SHAME: Jackson whom history books shamed, Nixon who resigned to escape shame, Clinton who said sorry, sorry sorry how many times do you want me to say sorry?There is no SIGNIFIED of SHAME. Then on TV while I am doing my mile and watching I see their faces contorted into Bunraku hysterical faces of outrage and fury at the danger to our nation!

But it is bad acting and even a bad caricature of an outraged member of Congress who cannot be acting outrage in order to be believed. Why?

These members of Congress have long ceased to represent anyone who voted for them. How would any of them even know what political outrage is?

They represent those who fill their campaign coffers and still entice you to vote for them as a MASK of representation concealing the REAL which is EMPTY.

This impeachment has been pure theater. Now #Pelosi in withholding the Articles to "make sure the Senate gives a FAIR TRIAL! I mean one house congress person casts doubt on the entire Senate by questioning their honesty, sincerity, integrity in holding a FAIR TRIAL?

What is the #McLuhan MESSAGE in that statement? (How about half of us dont trust the other half will that work?) Any bunch of govt leaders with this lack of mental clarity in language and strategy is to hold our respect enough to spend our money and call the shots?

NO NO NO a thousand times NO! And this is THE BEST they seem able to do to deal with Trump. Could we put any of them up against Putin, that educated and suave leader, or Xi of China? I shudder.
Not to mention that North Korean moron.

Posted by seymourblogger at 6:18 PM No comments: Links to this post